Korean fried chicken is all the rage

Mikee and Ria had just arrived from New York City. All they talked about was where and what they ate and what was new and popular in the city. Captivated, I listened as my mind transported itself to the streets of New York imagining these items making waves in the Big Apple. One of the dishes they mentioned was a Fried Chicken that caused a long queue of diners. Bon Chon Chicken is a Korean fried chicken that is deep fried twice then tossed in a sweet and mildly spicy sauce. Mikee believed in this new craze so much, he contemplated on getting a franchise and opening one in Vancouver where he and Ria reside.
As always, word of this new craze spread like wildfire reaching as far as Manila. And like many products that are a hit abroad, they get duplicated. I recall driving along the main road of BF Parañaque on my way to Hanakazu, the best Japanese restaurant outside a hotel. My eye caught sight of a Korean restaurant offering a crispy fried chicken also with a glazed sauce coating. This was way before I had heard of this Korean specialty. I remember the pictures of the place looked so appetizing, I had to buy a few pieces just to taste. It was good, but it wasn’t something I would crave for. It was similar to a crispy chicken dish I once watched chef Henry Chiong of Good Earth Tea room prepare in a cooking demo. Now that dish was good.
A few years after, many versions of this Korean specialty, like mushrooms have sprouted all over the metropolis, all claiming to be the best version. One opened along Jupiter street in Makati; taste was okay but it looked like a home cooked fried chicken. Then another opened in Banawe street in Quezon City. Charlie’s also has the same concept. Also good but I guess because deep-frying tends to make a dish oily, I can only have a few. Then another opened along Katipunan across Ateneo. I have never tried it but my nephew and upcoming young film director Gio Puyat raves about it.
One day, I got a call from one of my fellow culinary addicts and buddy JP Paz. Like me, he tries all these places that have been trying to duplicate Bon Chon chicken. Four Fingers is in SM North Edsa. It also has the same characteristics as all the rest but there are two things that draw me to this version. It is a hit in Singapore, and even after having it when it is no longer hot and fresh, the morsels were still crispy. The very next day, I drove all the way to SM. I had just had lunch but I was so intrigued, I just had to try it.
The place looks like your typical fast food joint, bright and neat. Their specialty? Crispy fried chicken like all the rest, legs and wings. The chicken is served in a tin lunch box container with some rice. It seems that once the chicken is fried until crispy, instead of tossing the chicken in some sauce, they brush the sauce over it. Interesting. Four Fingers has 2 kinds of sauce. I got the more popular soy garlic sauce. A spicy version is also available but I’ll try that some other time. One other thing I noticed, the layer of crispy coating is light and not as thick as their competitors'. In a dish like this, a major factor is the texture. Among all those I've tried, this is the best.
I enjoyed the Four Fingers chicken so much I brought an 8 piece order and a sandwich home. One cannot imagine how my growing boys eat. I have two of them, Franco and Arturo. I had barely set the food before them when right before my eyes I watched the food turn into bones and the sandwich just disappeared! They took after their dad.
This reaction I would say is an amusing gauge for the quality of this dish. There are other items on the menu, calamari and shrimp, Katsu Chicken sandwich and a Kimchi coleslaw were the ones that caught my attention.
Whenever, I have a craving for this Korean specialty, I know where to find what to me is the best.
FOUR FINGERS is in SM North EDSA beside National Book Store.
If you are around the Pasig area on a weekend, checkout Il Mercanti's Market, 6 am to 2 pm every Saturday and Sunday at the parking lot of Metrowalk.
HAPPY EATING!
Posted by MidlifingOne at 2:19 PM No comments: 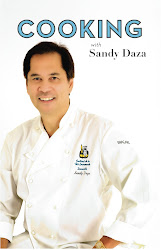